I have a number of different tarps in different sizes. I’m not bragging because it’s stupid to have this much gear specially when I hike about 4 times a year. SAD!

Watching Evan Shaeffer hike with his 8.5x8.5 cuban tarp and JupiterHikes with his tarp and listening to their stories… as well as flatbrokehiker and some books I’ve read … There is stuff to be learned. [a] be comfortable [b] endure some discomfort [c] just take what you need [d] camp is meant for sleeping.

I think MLD has a tarp they call the “monk”. It’s a lightweight 4x8 or 4x9 if they even sell it anymore.

I’ve been testing my 5x9 in the backyard and it’s been OK. No major challenges that I can see. It is clearly the “monk” style where it’s just meant for sleep and there is not much wrong with that. There’s not much room under the tarp for deploying a pole to keep the bugnet of my bivy off my face.

There is just enough coverage under the tarp and to stay dry you gotta stay away from the opening. You might be able to sit up but hunched a bit. Cooking could be risky.

You might not be able to tell but the 7x9 is two feet deeper meaning the setup could be dryer from the initial deploy. There were a couple of challenges with this setup. The ridge from the pole to the back tieout had more tension because it was heavier. The trekking pole did not have the basket so getting it to stay put was a challenge and will likely need a better knot. Being almost square the angle were different. What’s nice is that I can sit up, even cook under cover (alcohol, tab or gas).

As much as a criticize tarps that a asym or catcut and biased for AFrame conflagrations this seems like the ideal configuration for a flat tarp. Certainly I can create more room or ventilation with a second trekking pole. I can also pitch it closer to the ground. This particular tarp only has tieout points around the perimeter and so that limits the usefulness. 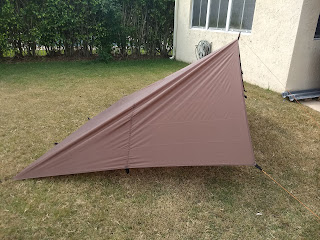 The tarp could not be tensioned in all directions but this seemed like it was still OK. I had not hammered the stakes deep into the ground as I should and with this configuration they’d just pop out so it’s reasonable. 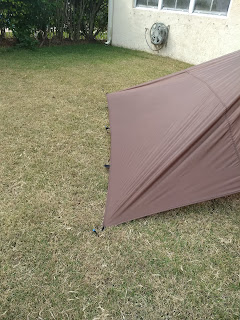 I initially thought that the back wall should be square. Once I put tension on the pole through to the back-center I realized that a slight bow was preferred.

Lastly, when folded like a sheet the 7x9 packs small. I’m not sure this is reasonable in the rain but it’s possible… but if you are using a small pack like a UD-15 then you better practice. Things I like about this configuration: