Then there is the rebates. As I mentioned in my last post that Amazon computed the rebate price even though the “purchase by” period has passed… Now here is some more Amazon magic.

As I was still looking for a good barebones computer for some clustering I wanted to experiment with I found another MSI device. This one appears to be $32 after rebate(s). That seems to be a great price if you ask me! 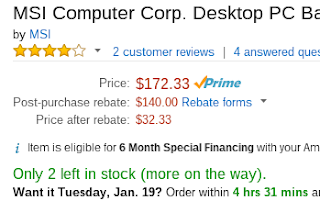 So when I looked at the rebate links I was not surprised to see that while the dates were ok… there were 2 rebates in the popup. So clearly someone made a mistake. Whether it was Amazon or MSI it’s tough to tell but he rebates are identical and I seriously doubt that MSI is going to accept two rebates for the same purchase. 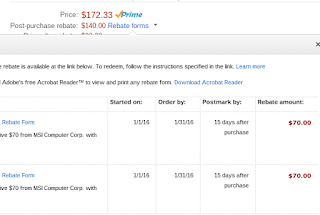 While this was not the compete terms and conditions (there was some small print at the bottom) This section looked familiar to many other rebates I’ve seen. The good news is that it’s not limited to one per household and not even one per purchase. 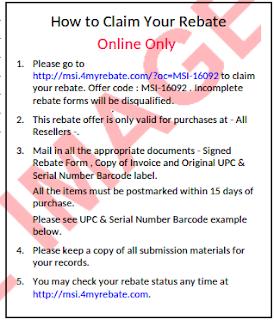 Well, I was wrong again. When I read the fine print I found:

Limit (1) rebate per qualifying rebate offer, per person, billing address, company, household and receipt/invoice/packing slip during the eligibility period, except were prohibited by law.

I don’t think this was intentionally misleading and in some cases rebates can make the difference. Keep in mind that rebates are the company’s attempt to capture analytics that would otherwise be limited to the seller. While that makes sense on one device it would drive the margins down too far and encourage resale competition on eBay etc.
Finally, the UPC and the application need to be postmarked no later than 15 days from purchase. Since I previously noted that in some cases there was a 20 to 45 day delay it might be impossible to collect.