it’s clear that we are in the holiday shopping season and that with all the shipping things are going to go wrong. But I’m not sure that VERY wrong is to be expected and that Amazon is not going to help.

I have two different orders. The first was a pair of long sleeve shirts. According to Amazon it was supposed to be delivered early in the week but then the package was damaged in Miami. So I had the chance to refund or replace. I opted for the replace because I wanted the shirts. Now Amazon is tracking the package, yesterday, it was in Miami and Today it seems to be in San Bernardino. I just do not know how this happens…

The second purchase was a 32GB ram module for my computer. Amazon sent it through their own system and while it was originally reported to be delivered Friday they changed the information Thursday morning to say it was going to be delivered Thursday. In fact Amazon said, OUT FOR DELIVERY. 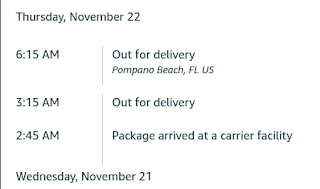 Well, it never arrived. As of this morning the history has not changed and yet it still reports OUT FOR DELIVERY.

Regardless of the season Amazon Prime made certain promises. They electronically change their collective minds at will without compensation. And Amazon Prime prices are generally higher than non-prime prices.

Amazon is growing so big, so fast, that they seem to be the facebook of retail and by the time government figures it out it may be too late.