Base weight 8.8 pounds and SOL given up but so close

I’ve officially given up Super Ultralight. To recap why: too expensive to manage 30 degree temperature swings. And so I have decided to work on Ultralight hiking and I’m about there. 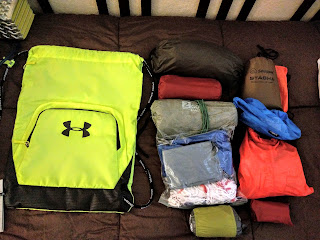 I decided to get a new pack. It’s a sports pack with no padding, frane or support. It cannot weigh more than 100g even though this model seems to be made from some sort of canvas or robust material.

Included in this pack: hammock, tarp and stakes, 2⁄4 mattress, bivy, micro-towels and schemog, poncho, water system, first aid, fire kit, EDC kit, and a pillow. The total weight is 8.8 pounds. Once I’ve added 1L of water and 1.5 pounds of food I’ll be at about 12 pounds. The pack feels nice as the cord is slightly padded but some padding would be nice or maybe cutting the padding down a little.

And then an amazing thing happened: 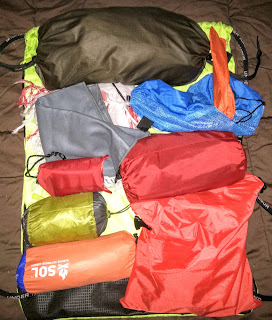 I swapped out the 2GoSystems with the SOL bivy; removed the extra towels; dropped the tarp in favor of the poncho/tarp, removed the fire kit and trimmed my first aid kit to tape and Imodium. I might actually be able to get to SUL weights if I dropped the mattress and reduced the amount of soap, sunscreen, bug spray, sanitizer, use aquamira tabs instead of drops or premix drops, and removed the sawyer.

UPDATE: while I thought Super UltraLight (SUL) was all about money I was kinda wrong. The kit below offers some accommodation as it weighs in at 4 pounds and yet it’s not a favorite. 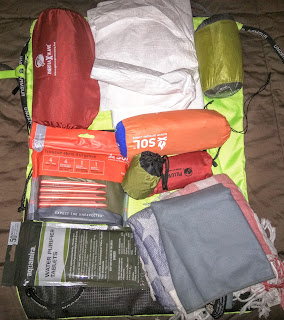 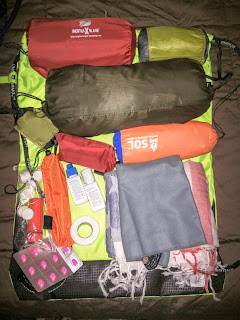 This pack is officially 4.5 pounds. Now there is room for a second pair of socks and maybe a mosquito net.

UPDATE: Lastly I decided to see what would happen if I replaced the hammock with my tent. The net result is 4 lbs 10 oz and it was just a little larger as the tent is not compressed. I also changed the mattress and that added about 70g. 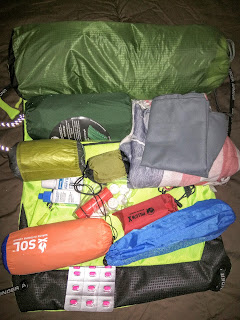 I still think SUL might not be safe or practical depending where you are hiking. Ultralight makes a lot more sense and in my case since I think I might need both a hammock and a tent I could easily stay UL.