Sitting here at my desk with a Sponge Bob bandaid on my finger I feel like an idiot. I was taking a moment from my day, as a programmer, to relax and get my thoughts before I started work on my next segment. I decided I was going to Baton some wood.

This is what our wood looks like in suburban Florida:

This is my anvil for processing wood. I think the retailer was trying for a Swedish torch so when I’m finished with it as an anvil I will burn it too:

This is my box of feathersticks

This is my baton (pretty certain it’s a verb and a noun): 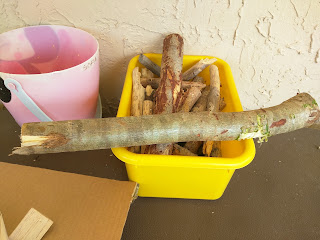 What went wrong? To be hyper critical a number of things went very wrong. First and foremost I was not thinking and taking my time. The first thing I did as was use my silky saw to create the baton. As soon as I picked up the dead-fall I thought to myself that the baton was going to be too light. And after the first 5 or six whacks of the baton against the halved log (birch) I should have realized something was going wrong. Between the hardness of the log and the “mass” of the baton I was not going to accomplish a split with my Mora Pathfinder. So used my Mora ax and halved the half. Then I switched back to the pathfinder and managed a number of productive splits.

Excited with my success I put down my pathfinder and eagerly drew my Mora Black from it’s sheath. OUCH! I just sliced my finger. It wasn’t deep. Just bloody. I managed a few splits with my Black and then decided to put everything away and clean my mess.