I thought a black tarp was going to be a good idea when it’s rainy season. This way the tarp had a better chance of drying. On second thought the disadvantages outweigh the advantages. 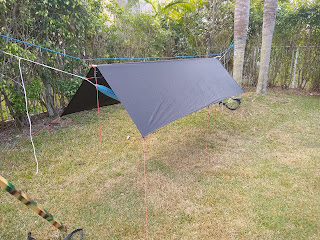 [a] just because it’s black does not mean it blocks out the light the way those umbrellas with reflective coating do. Plenty of light gets in.

[b] I do not have any scientific evidence but it seem that the color radiates the heat a little more.

[c] Whether wandering around with a flashlight at night or even during the day a black tarp has an element of stealth on the trail. Personally I’d prefer to be seen and in the case of rescue some sort of contrasted field. 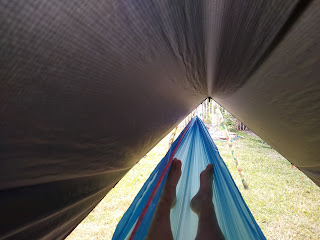 What is great about this tarp is that it’s 9x5.5; without a seam; and all but the tips are under the tarp. It’s about half the weight of the 10x10 tarps and with as many options and without those crazy cuts and shapes that dictate use. Probably the best part is putting it in the outside pocket when it’s wet. 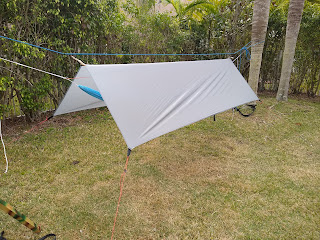 It’s not yellow or orange but grey, almost white, feels cooler even though the sun is behind the clouds right now.