One article I read make the suggestion that toggles are hardware even if you use twigs. After I initially conceded the point and tested some knots I was OK with the findings. Then I watched this video:

Normally a corner guyline is 3-5 feet… he recommended 6 feet. Attach it to the corner and then tie loops every 6-10 inches. When deploying the tarp pick the angle then the loop and then set the stake. My favorite part about this is that I’m not tying knots in the cold or in a hurry. Also there are a number of ways to attach this to the guy out points so that there is some flexibility. And more importantly I can use some micro cordage.

What I had been considering was some 2.5mm cordage and some variation of prusik knots and soft shackles. The clear difference here is that this configuration is clearly more technical than the former. Also I can carry a lot of micro cordage where the 2.5mm cordage does take up space and weight. 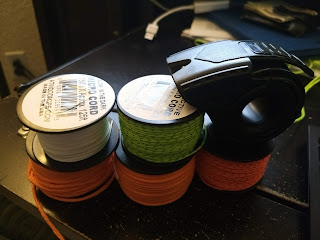 UPDATE I assembled six 5ft segments and two 7ft segments. On each end I attached a small mitten hook. And created a series of knots about every 6-7 inches. Precision was not important. Next I attached them to the 5.5x9 foot Boarah Gear tarp. I deployed the tarp with two 33 inch tent poles.

Considering that some part of the pole get’s buried in the ground 36-40 inches would be better. But let’s consider some math… 5.5*12⁄2 = 33.  That means half the width of the tarp is 33in and if I wanted the sides flush to the ground I’d have to go lower than 33 in. I have a 7x9 tarp from Borah and if I wanted the same configuration I’d need a 42 in pole. Which means a 36 in pole with the second tarp might be ideal. You might be asking yourself why poles instead of adjustable trekking poles. These tent poles are much lighter than trekking poles.

UPDATE here’s a cool video with some interesting options.


As much as I like tent poles this example with trekking poles make perfect sense. That it’s a leanto style means you really need to know where the wind or the rain is coming from. Getting it wrong means you have to re-orient the poles. An A-frame might be OK if the rain is falling straight down. A 32 inch pole does not give you enough room.

UPDATE: six 5 foot and two 7 foot turned out to be nearly 100 feet of 1.18mm cordage. A spool from Atwood runs between 10 and 20 bucks depending on type and availability.