I was thinking about using polycryo as a material to make a tarp. I’d set it up a few times for ground sleeping and it worked ok. Yesterday I configured it for my hammock. While it setup no differently than any other tarp I was not able to test it in the hammock because my portable hammock stand’s anchor failed. 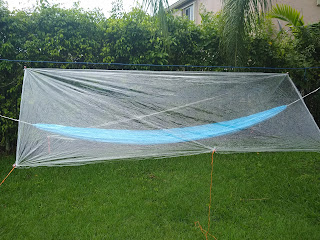 I like the idea of the clear material so that I can still interact with the environment and unless I needed shade it was just fine… hikers typically say hike until it’s time to sleep. Then sleep. So it does not really matter what the material is made from unless you need privacy for changing etc…

Anyway, I left the tarp out over night and in the morning all was just fine. Then, after lunch, I noticed the damage. 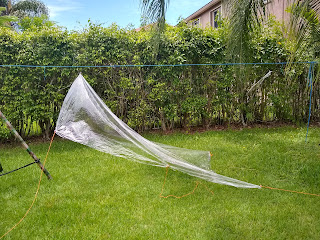 The polycryo ripped. It would have been interesting if the rip had ripped at the guyout rather then near the guyout. That it’s not rip-stop means that once a rip starts it’s not going to stop… as happened. I suppose I could have taped a seam but by then all that weight of the tape would clearly add weight to the tarp that by the time you take weight AND durability into consideration anything would be better.

So the lesson learned is that polycry is better as a ground sheet and leave it at that.