This was a disappointing purchase. 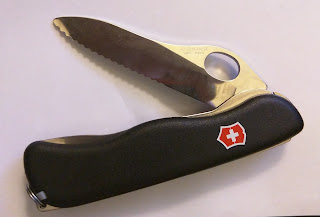 While the knife is very sharp and the serrated edge make it excellent as a replacement steak knife if the restaurant does not have anything better… But the real test was making feathersticks. During my first attempt I was not getting the knife to bite or even make the lightest feather. And when I was able to create a feather it took to much of a bite. Very frustrating

On my second attempt I was able to get some thin feathers but only from the fine edge portion of the blade. Once I started to slide the blade towards the serrations the serrations grabbed hard and I ended up putting more power into the cut and eventually shredded my previous work.

Finally, I started to take a closer look at the blade. The fine edge i not very fine. First of all it’s only one sided; which probably has to do with the serrated and all of that means that it’s probably meant for a right handed person even though the lock is left handed or so the experts say.

PS: Since my model included a pocket clip I should mention it’s also uncomfortable in the hand.