Victorinox, aka S.A.K., is probably one of the most recognizable knife companies out there. I do not recall when I receive my first SAK but I have received, bought, and lost many. In fact I have one in my dopp kit for when I travel and check my bags and several around the house including my office. 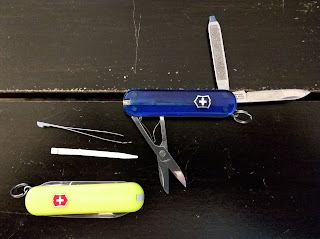 Recently I decided to give the SAK Farmer a try as one of the BOBs (bug out boys) I like to watch decided to leave his fixed blade at home and try an expedition with just his Farmer. He was successful, however, unless he secretly had a saw, fixed blade or secret ax I think I learned a few things from my try-stick.

After considering this I came to the conclusion that using a SAK Farmer is a trade-off between time and weight. The blade and saw are so small that your wood is likely dead-fall and dry or very dry. The saw blade will become ineffective as the green material sticks. And the small blade does not baton very well. Adding a cobra type paracord lanyard as a grip was somewhat helpful but much less than perfect. Practicing a tight grip the part of the knife body used to connect the lanyard ring protrudes from the knife body and is irritating to a tight squeeze. 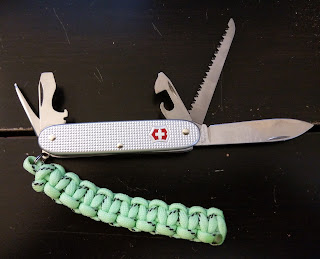 I like the position of the awl as a striker for my fero rod. Having the awl, blade and saw are good tools for making a bow-drill or pump fire drill. The can opener and bottle opener are always handy, however, I think Robinson, Torx and/or Phillips have long overtaken the “regular” screw.
PS the spring action is pretty tight. I could have lost a finger.