STS makes 2 different models of the SOLO/SINGLE net tent. One is a nano with insect shield and the other is without. The nano is a grey material, it’s light and feels like pantyhose. Where the non-nano feels like a coarse head bugnet or even a cook’s headnet.

I decided to deploy the net today and while my nano is about 9 months old I’ve never used it. The material is soft and stretchy. The cord at the top is stretchy like a lightweight shock cord. Unfortunately I’d never noticed but there is a hook and loop patch attached to the net and it would not release. In the end the net ripped. 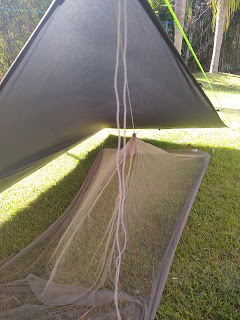 So then I tried the other. It’s not treated but I have some spray. It’s not soft and it’s larger in volume than the nano. The cord is not a shock cord and that seems to have made the deploy better. Frankly you’re not really supposed to touch the sides because that’s where the bugs hang out. 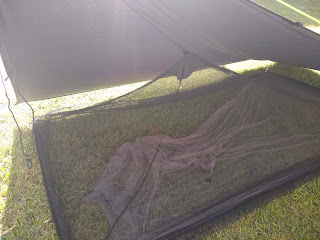 In this configuration I should be able to relax and sit up. I could do a better job with the setup but this seems to work. Looking at the configuration I’m questioning whether polycryo or tyvek would make a better ground sheet but that’s a topic for another day.