The hammock critics are in

Here are some hammocks and why I do not like them… 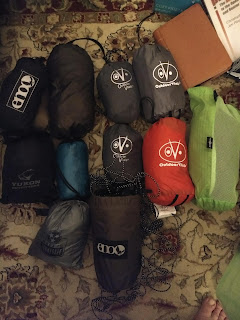 The ENO hammock, straps, and tarp might be bullet proof, however, they are heavy. Probably the heaviest in the bunch. I cut my hammock teeth on this hammock and I should have saved my money. I tried to replace the straps with 770 cordage and other straps but both failed. The tarp does not really fit in the bag.

The one Yukon Outfitters(YO) hammock is lighter than the next but their straps are heavy. I replaced one set of straps with some Dutchware gear which made the lighter hammock a better contender but not by much. The bugnet is heavier than the alternative from Dutchware too. It also barely fits in it’s sack. Lastly the diamond shaped tarp is useless for anything else and while not heavy it’s not the lightest. YO no longer sells these modes. My guess the materials are too light.

I have 2 complete Outdoor Vitals(OV) hammocks and tarps. The last thing I just noticed as I tried to re-stuff the ENO back in it’s sack is the similarity to the OV tarp. The corners, the hardware, the way the hardware was attached, the design of the stuff sack. The hammocks are 4’ wide which makes it harder to sleep diagonally. These were purchase before they sold their double, however, it’s a strange size when compared to the STS who single is 5” wide. UPDATE I forgot to mention that OV uses whoopie slings instead of straps and the demo video cautions against getting them dirty.

Not pictured above is the Klymit Traverse and tarp. These are just stupid heavy and I want to return them before I try them out. I’ve determined that a modest hammock setup is going to weigh about 2 pounds; this combo weighs double that and nearly double the pack volume.

The dutchware bugnet is awesome. The OV bugnet might be a close second because of it’s price but it seems heavier from the materials. The Sea to Summit tarp is tucked away. It has an odd shape making it difficult to use it for other purposes; but not impossible. The stuff sack can be a challenge if you are in a rush. The straps are not universal.

In conclusion I’m confident that a 2 pound hammock shelter is possible and no more costly. Deploying a hammock shelter means that you need trees, some camps do not permit hammocks, and in some cases the ground under the hammock can be dangerous. Of course there is a ground configuration but that takes practice and defeats the purpose.

THE DIFFERENCE BETWEEN A SINGLE AND DOUBLE – One might think that a double is suited for two people. Well, it is, sort of. It just means that there is slightly more width t the product but that does not add any strength. The manufacturers above make no separate claims. The extra width is supposed to offer room for a second person but frankly there are still unreasonable weight limits (400 pounds is not much) and because the hammock is not tapered the side have a tendency to wrap the person like a cocoon. And only more so in the double.