Getting the perfect bonfire is subjective, however, in my case I can define it… 15-20 ft flames lasting 1-2 hours. I’m no expert and there are no howto videos, blogs or manuals that I can find. 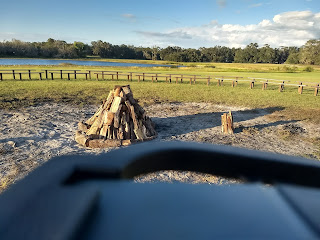 To the right is a pseudo Swedish Torch.  I took 5-6 log segments and formed a log; then used some bailing wire to hold it together. On the first night the torch was lit with “fat wood” from home depot and some lighter fluid. For an ignition source I used a yellow torch from Home Depot. On the second night I only used the fat wood. Ignition was achieved using a fat wood feather stick and a small lighter.

On the first night ignition was achieved with 3-4 liters of lighter fluid. and two of those yellow torches. On the second night only 2 liters of fuel and a simple lighter at the door.
On the first night the pyramid was tight and well formed allowing oxygen into the core. The tight shell regulated the combustion. On the second night the pyramid was looser and although the flames were similar the pyramid was compromised more quickly. (I wish there was video)
Using a small lighter was probably not the best idea for safety reasons… I think a goose neck lighter or even a oil soaked proper torch.