I just finished watching a number of howto care for your Mora knife when I found this video representing the “perfect” knife. This is more of a complaint than howto blog because while this guy demos a sharp knife slicing paper to shreds.

I have several issues with using paper as the “test”. First, it’s simply not a real life use. Anyone using paper as a kindling is going to use their hands to shred or crumple it. Second, if you’ve ever used your really sharp knife to cut cardboard it get’s dull right away.

I do not claim to understand the physics of a sharp edge but I know a couple of facts from firsthand experience.

So the reality… know your knife and understand what makes a “good” edge that lets you work longer without having to sharpen it.
Continued, I have a collection of knives. I’ve already given half of them away. What remains is a collection of Mora knives with varying blade lengths and widths. There is something to be said for making feathersicks when the wood is right but then there are so many other types of tinder.
Two years ago I tried to baton some firewood but failed terribly and ruined my knife.
Three weeks ago we went camping again and this year I was responsible for the bonfire. Besides the structure I also introduced fatwood. I do not believe I’ll ever be able to construct the fire without liquid fuel. however, I was able to reduce the danger by starting the fire with a lighter instead of a flame thrower (butane torch). In one test fire making feather sticks from the fatwood helped ignite the fire right away.
During another hike we cut down a tree with a saw and sawed the tree into segments. I wish we had the ax as it would have let us split the logs in order to get to the center of the log. For the type of hiking and camping I do either the logs are provided or I gather deadwood or standing deadwood. I think the saw is the safest tool because there is little energy that is put into it to get the job done.

The Silky saw was a bushcrafters favorite but now it seems to be some model of a collapsing saw. 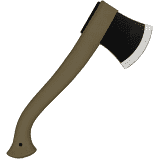 Axes are heavy and come in different sizes based on the task. I like the Mora axe to supplement the saw. The resin handle is light and the blade is sharp and takes an edge. The hammer side is kinda narrow so it won’t be useful for pounding stakes. Axes are not particularly sharp in fact most are meant to act as a wedge to separate the log fibers lengthwise. 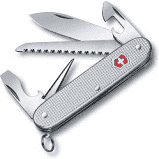 My SAK Farmer is an interesting knife in that it has an edge for making feathers and a saw for cross cutting but really it has a limited diameter. The folding nature of the knife does make it a little more precise and error prone.
So as I swing back to the meaning of this post; super-sharp is bad; sustained edge better; choosing the right took for the task.

UPDATE to sort of put a point on it…