The first two of the travel routers I purchased have arrived and while I hate meaningless unboxing videos I’ll spare you the details other than to say that the RavPower All-In-One FileHub is minimally packaged both inside and out; just the router and a USB cable leaving me to provide the wallcharger. The ZyXEL Wireless Router included the device, USB cable, universal power br. Both had very little documentation although the RavPower was easier to comprehend and if you want to get beyond QuickStart use-case you will have to download the ZyXEL manual. 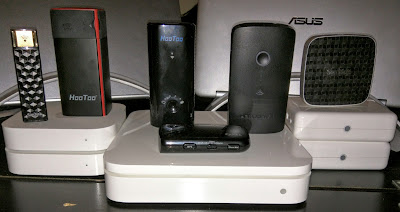 Sandisk Media Drive
- worth a mention but that’s it. It was meant as a file server more that a router.

Sandisk Connect
- worth a mention but that’s it. It was meant as a file server more that a router.

In part 2 I’ll put the ZyXEL and RavPower to the test.