My daughters and I go camping with our Indian Princess group (dads’ and Daughters) several times a year. The camping we do is just slightly removed from glamping and in the next few weeks we are going to Disney’s Fort Wilderness Primitive sites…  Normally I deploy a Kelty 4p tent for the 3 of us but this year they are likely to get the tent to themselves and I’ll try bivy+tarp right next door.

One of the things that is troublesome for me is that the temp is usually very warm until 1am and so it’s hard for me to sleep. The tent, with the rainfly, captures a lot of heat. In fact the prevailing philosophy seems to be get a tent that is 2x the number of people.

So this morning I popped up my BearPaw Wilderness Designs Lair as a benchmark. 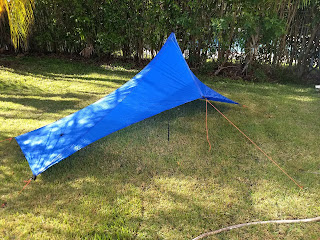 It’s wide open and so there should be plenty of ventilation. All I need to add is a bugnet or a bivy. One advantage is the “short” cordage and in-built line locks. One downside is that it really needs a pullout for a little extra headroom. Even though the lair is seam sealed it’s made from multiple panels and so subject to failure.

The second setup is my tarp+bivy from Borah. 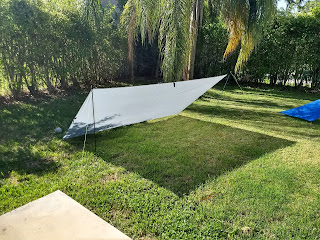 If memory serves it’s a 5x8’ tarp. There are several configurations depending on the weather and while I elected to use tent poles here there were troublesome. I have plenty of trekking poles so I can make that problem go away. One nice thing is that the tarp has no seems and so there is nothing that can malfunction that wouldn’t happen anywhere else. 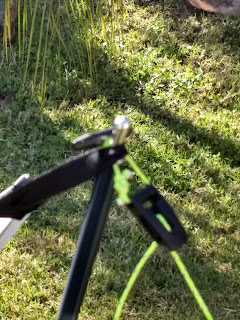 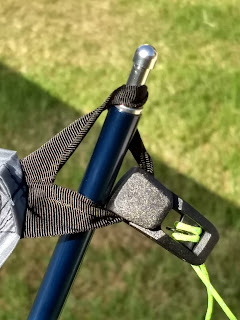 I tried two different line locks but it seems that trekking poles are the only way to go unless I design another contraption. One that comes to mind is a 3 grommet with webbing  The tarp also needs a pullout.
As a variation on the tarp+bivy I deployed my 2gosystems XL. I’ts much larger than I anticipated for a single occupant but it has the benefit of offering extra shade. Even though this is technically a bivy I had always intended fr it to be a tarp. 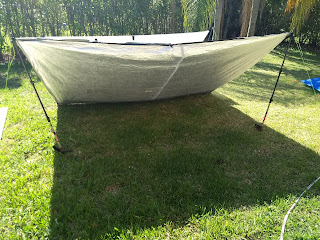 Like the others it also requires a pullout, however, there is a tie on the outside (look closely). 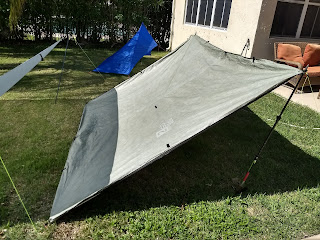 One sleeping configuration I saw of the SOL tarps was multiple sleepers with their heads at the open end and feet at the closed end. With the size of the 2go tarp I could shelter 4 on a dry night and 3 on a wet night. 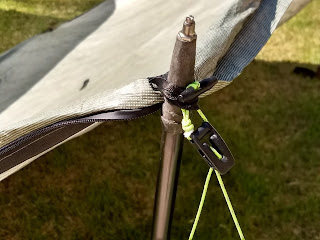 The loops on the 2go tarp are smaller and although I do not have cups on these poles that was appreciated. The line locks worked ok.

The next step is to pick up the poop and get ready for bed.